"Look, all I wanted was a frickin' rotating chair!"
— Dr. Evil, Austin Powers: The Spy Who Shagged Me 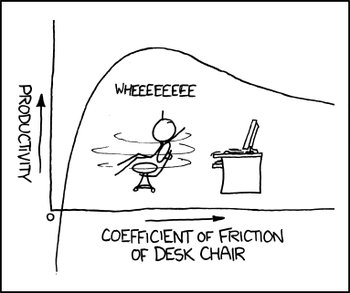 As the CoKF approaches 0, productivity goes negative as you pull OTHER people into chair-spinning contests.
Advertisement:

are amusing pieces of furniture because they have wheels and can spin.note Fun Fact: The swivel chair (without wheels) was invented by Thomas Jefferson. Boredom and these can lead to endless possibilities.

Could include either someone spinning in a chair out of boredom or restlessness, rolling around in it in favor of just getting up, rigging them with explosives to fight bad guys with, or riding them like makeshift chariots.

This is often an integral part of Office Sports; also compare Wheelchair Antics.

Ron finds one small perk of a recent manager shakeup.

Ron finds one small perk of a recent manager shakeup.