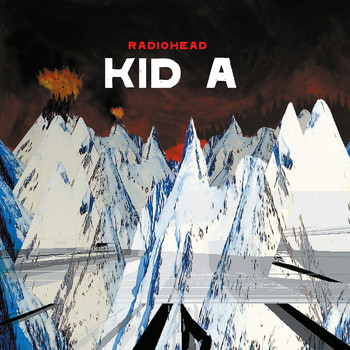 Kid A is the fourth album by English Alternative Rock band Radiohead. Released in October 2000, it marked a new stage of the band's sonic experimentation.

The group had been dabbling in Electronic Music as early as "Planet Telex", the opening track from The Bends, and by their next album OK Computer, its influence on their sound had grown more prominent. Kid A, on the other hand, saw the band dive headfirst into electronica, using it as the structure of certain songs rather than purely for texture.

This change was motivated by the band's burnout following the extensive promotion of OK Computer and the growing number of bands following their example, which — combined with Writer's Block — resulted in frontman Thom Yorke suffering a mental breakdown and becoming disenchanted with not only Radiohead's standard guitar-based music, but with the entire concept of rock as a whole. Listening to acts like Autechre and Aphex Twin drove Yorke to the realization that instrumental electronics could evoke the same emotions from him as guitars. This set the ethos of creating Kid A; among the many influences the band drew from in its production, the album can be best summed up as combining the abstract and artsy electronica of Homogenic with the disjointedly surreal and anxious lyricism of Remain in Light and the lonesome, wintry vibe of Low.

Upon release, Kid A was a commercial success despite its deliberately uncommercial direction and promotion. Utilizing unorthodox promoting tactics — eschewing singles and music videosnote though promotional singles for "How to Disappear Completely", "Idioteque", "The National Anthem", and "Optimistic" were given out to radio stations for a series of short televised "blips," most of them animated — the album debuted at the top of the Billboard 200 in the USA and went platinum in the UK during opening week, eventually getting Radiohead its second Grammy Award for Best Alternative Music Album and second Album of the Year nomination. The album also topped the charts in the UK, Canada, France, Ireland, and New Zealand, ultimately becoming the 50th best-selling album of 2000 in the UK.

While the band found Creative Differences over the album's direction, at one point agreeing to split up if no final product could be made, over 20 songs were ultimately produced over a grueling 18-month period. One half is included on Kid A, and the other is on Amnesiac, which came out six months later as a loose companion piece.

Just over 20 years later, the pair were re-released together as part of the anniversary release Kid A Mnesia, consisting of both albums and a third disc of outtakes in the vein of the OKNOTOK reissue of OK Computer.

We've got tropes on sticks:

"I will see you...in the next life."
Feedback