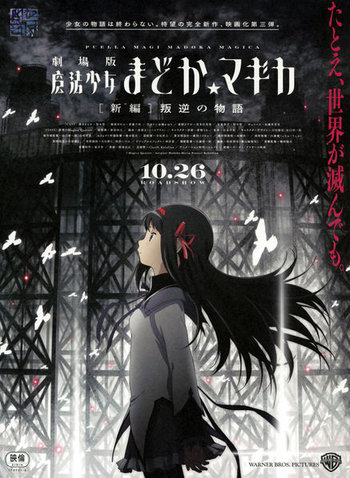 The nightmare isn't over. Not yet.
"In this broken world, doomed to repeat its tragedies and hatred, I dreamed of someone I knew and saw her familiar smile again."
— Homura Akemi
Advertisement:

Puella Magi Madoka Magica The Movie: Rebellion (subtitled Hangyaku no Monogatarinote The Rebellion Story in Japan) is a feature film for the 2011 anime series Puella Magi Madoka Magica. The movie follows the anime's two-part Compilation Movie released in 2012. Originally intended to be the anime's second season, issues with length prompted a rework of the outline into a third film. The film premiered in Japan on October 26, 2013, and the film was later shown with subtitles in select theaters internationally, with the English dub released on Blu-Ray and DVD on April 7, 2015.

The movie has a manga adaptation by Hanokage, who did the manga adaptation for the first anime, as well as the Spin-Off Puella Magi Madoka Magica: The Different Story. Rumors and vargue teasers about a proper sequel to the film would float around for years afterwards, before it was eventually confirmed in April 2021 that a sequel film, Puella Magi Madoka Magica Movie: Turning the Tide of Walpurgis was in production.

, voiced by Kana Asumi in Japanese and Xanthe Huynh in English. In addition, there is a new type of monster known as "Nightmares".

Late-Arrival Spoiler Warning: Everything below this section will have unmarked spoilers for the original Puella Magi Madoka Magica anime. If you have not watched the anime and do not want to be spoiled, do not read this page. Many examples on this page are shared with the anime. All spoilers may ruin your enjoyment of the story. Again, avoiding these pages is highly suggested for those who have not seen the show. YOU HAVE BEEN WARNED.

At the end of the original anime, Madoka sacrificed herself and made a wish that changed the world. In this new world, magical girls no longer become the very witches they're fighting; instead, they vanish before they can be fully corrupted, in a phenomenon known as the "Law of Cycles". In this world without witches, Madoka, Sayaka, Mami, Kyoko, and Homura all fight together to protect the city of Mitakihara from a different threat, the Nightmares.

Wait a minute... that's not how it went! Madoka and Sayaka ascended to a higher plane of existence! And the new monsters were called wraiths,note "magical beasts" in the original Japanese not Nightmares! And what is that odd creature that looks like the witch Charlotte? Homura soon realizes that things are not what they seem. But she may not want to find the truth, for at the end of it all... is the being that rebels against the order of God.

"The mind is its own place, and in it self. Can make a Heaven of Hell, a Hell of Heaven."