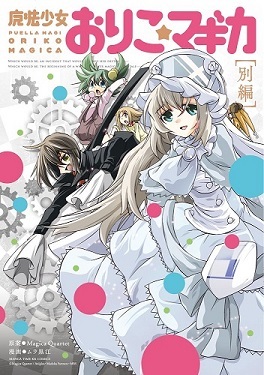 Puella Magi Oriko Magica is a manga Spin-Off of Puella Magi Madoka Magica created by Kuroe Mura, released in Japan shortly after the anime's conclusion. Unusually, it was released only as a series of books instead of being serialized in a magazine beforehand, similar to the manga adaptation of Madoka Magica.

Oriko Mikuni, a new Magical Girl, sees a vision where a powerful witch attacks Mitakihara City. As she realizes that she is unable to fight the witch herself, she receives another vision of a little girl. She quickly tells Kyubey that this girl is a very good magical girl candidate.

Elsewhere and elsewhen, Kyoko Sakura fights a witch in a new city. At the end of the battle, she finds a little girl, who was orphaned when her parents were killed by the witch. This girl, Yuma Chitose, is the same girl Oriko saw in her vision. In a rare moment of compassion, Kyoko decides to look out for Yuma, though she is adamant that Yuma should not become a magical girl.

And so the stories of these girls, as well as those of Mami, Homura, and Madoka, converge...

The series has been licensed by Yen Press and both volumes were released in July and October of 2013.

Additional Oriko Magica stories are being serialized in Manga Time Kirara Magica, the official Madoka Magica magazine. The first, a two-parter entitled Noisy Citrine, expands upon the backstory of Kirika Kure. The second story is entitled Symmetry Diamond and focuses on Oriko and Yuma. Both stories were collected in a trade paperback entitled Puella Magi Oriko Magica: Extra Story, which also included a new story named Last Agate. The paperback was released in Japan on September 2013, and in the US on March 2015. A Prequel, titled Sadness Prayer, began serialization in Kirara Magica on November 2013, and it's first volume was released on February 2015 in Japan and November 2016 in the US.

Oriko, Yuma, and Kirika all made appearances

in the Puella Magi Madoka Magica Online game. All three are also playable in the 2017 smartphone game Magia Record.

NOTE: Keep in mind that Oriko Magica is used to both refer to the Oriko series in general, as well as the first installment of the series when referring to specific installments.