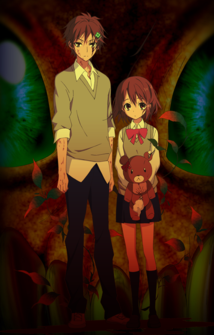 Pupa is a 2011-2013 horror manga written and illustrated by Sayaka Mogi. It received a very short 2014 anime adaptation by Studio Deen.
Advertisement:

Utsutsu and Yume Hasegawa are siblings estranged from their aloof, abusive father. One day, Yume comes across strange red butterflies, and awakens a horrible power. Utsutsu is cursed as well, and must try to protect his younger sister from forces that would love to dissect them both.