This page is only for Rebellion. Tropes present only in the anime go here. Note that many of the examples listed on the anime character page also apply to the characters here.

Beware of major spoilers!note This page assumes you've watched the original series in all its entirety, so tread with caution. 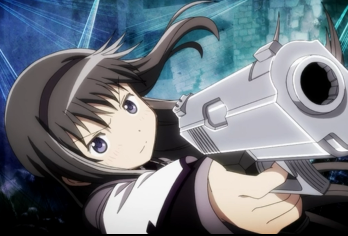 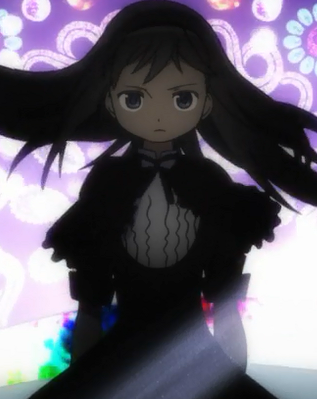 to see her witch dress (SPOILERS) 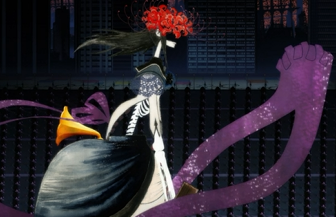 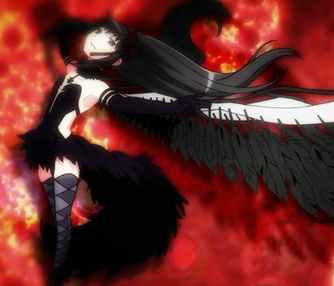 At the end of the anime, Homura was last seen fighting off wraiths with her new powers. At the beginning of the movie, she's returned to her glasses-wearing persona and is once again a transfer student at Madoka's school. She joins the other magical girls but soon begins questioning the nature of the world she is in, returning to her stoic badass persona and serving as the main character of the movie.

Note: As you can see, there are numerous massive spoilers related to Homura, so watch your step if you haven't seen the movie yet. 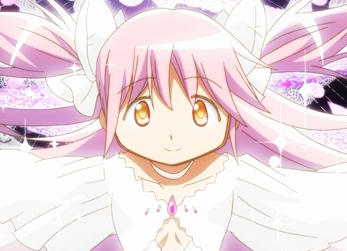 At the end of the anime, Madoka wished to destroy all witches before they were born, which ultimately erased her from existence. However, when the movie begins she is inexplicably alive and living with her family while secretly being a magical girl. Just how has this happened? 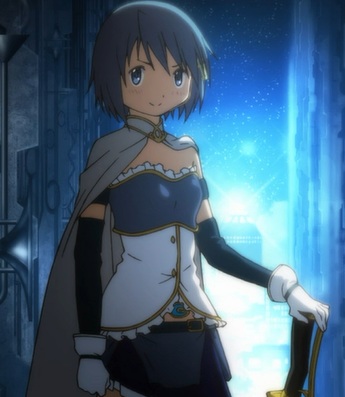 At the end of the anime Sayaka had vanished from the world, taken by the Law of Cycles. Like Madoka, she has inexplicably returned to life. Just what secrets is she hiding? 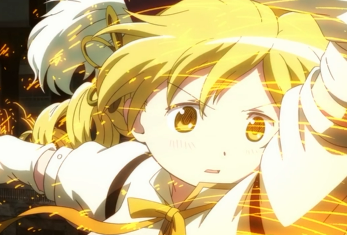 As before, Mami is still the senior magical girl in Mitakihara. However, she's now living with an odd creature she calls Bebe, which seems to have helped combat her loneliness. She comes into conflict with Homura when the latter attempts to discover the truth of their world. 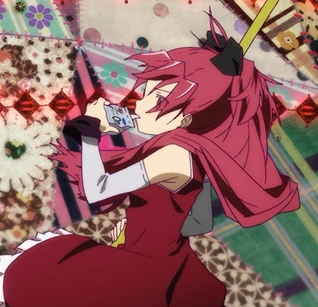 Kyoko is now a classmate of Madoka, Sayaka and Homura. She's also living at Sayaka's place, and it seems that the social interaction has made her nicer than she was in the anime. When Homura starts getting suspicious, she comes to Kyoko with a request that tips her off to the secret of their world. 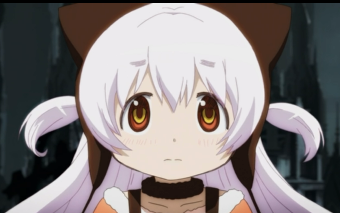 A brand new magical girl introduced in the movie, she is quite a bit younger than the others.

Note: Again, like Homura, there are many spoilers related to her, so watch out. 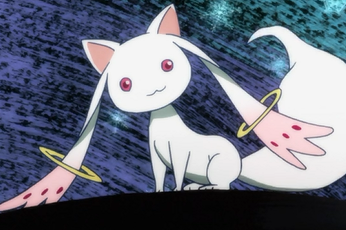 "Human curiosity is quite fascinating. And illogical."

The contractor of magical girls. In the movie Kyubey is more of a standard magical girl mascot: cute, cuddly, sweet and helpful. In fact this Kyubey is apparently not even capable of human speech. This turns out to be an act. Par for the course, his real motives are much more sinister... 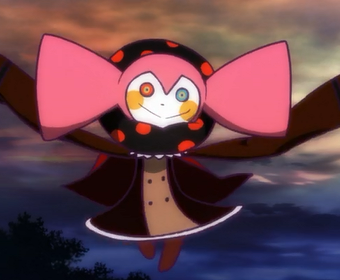 Nicknamed Bebe, the Dessert Witch Charlotte befriended Mami before she met the other Magical Girls and is helping the Holy Quintet fight Nightmares.

The new enemies of the movie, instead of the witches and wraiths. From what's seen in the movie, they appear to be monsters created by people having "nightmares", and transforming. Only two are seen and fought in the movie: the second one famous for being defeated by the ever-so-well-known Cake Song! 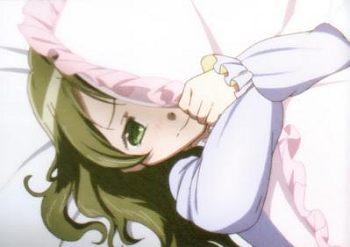 Madoka's and Sayaka's friend from school, and Kyosuke's girlfriend. She makes a brief appearance in the beginning sequences of the movie, where she temporarily becomes a Nightmare, before being calmed down by the Puella Magi Holy Quintet. 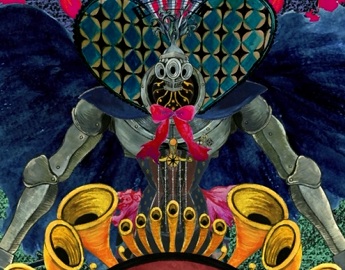 A group of fifteen unique and powerful familiars who serve Homulilly and later, Akuma Homura.