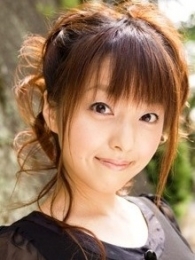 "Trorororoper-san... Sorry, I stuttered. Y-you're not mad at me, are you? Please don't be mad at me!"
Advertisement:

Emiri Katou (born November 26, 1983) is a Japanese voice actress. Perhaps her most famous role is of the Tsundere and straight girl Kagami Hiiragi of Lucky Star, for which she won the Best New Seiyuu award at the second annual Seiyuu Awards. (Fittingly, her co-star Aya Hirano had won the previous year.)

She hasn't done much work with her "sister" Kaori Fukuhara (Lucky Star's Tsukasa), but the two are fittingly good friends, and in 2010 did some musical jam sessions together with Emiri on drums and Kaori on bass. (Apparently both used to play those respective instruments in high school.) In Fall 2011 Anime, they both starred on Ad-Lib Anime Laboratory

, an experimental series in which the dialog was ad-libbed and recorded first, with the animation produced around it subsequently. This led to them also forming a unit, Kato*Fuku.

She also used to have rather poorly-aligned teeth; and when some "fans" mocked her for it quite harshly, she actually considered quitting as a seiyuu. (Note how she's trying not to show her teeth in that photo.) She rectified this

in 2010-11 by getting some extensive orthodontic work, but it cost her a pretty yen, and all because her "fans" on 2Chan pushed her into it.

Due to being a fan of the Magical Girl genre, she cried hard when she realized what kind of character her role in Puella Magi Madoka Magica is, mainly because that information was withheld by Gen Urobuchi. Despite all that, Emiri still did her job admirably and once the anime concluded, considers all of the hatred for Kyubey to be praises for her.

Thanks to that, she has won the 6th annual seiyuu awards

for Best Supporting Character by, due to Never Live It Down, Kyubey.

After that, however, she then settled into what has probably become her most famous and (in Japan) iconic role since Kagami: that of Sierokartenote pronounced sheh-ro-kar-teh, the perpetually-available, perpetually-helpful shopkeep allied to our heroes in Granblue Fantasy. Siero isn't quite as predominant as folks like Lyria or Vyrn, but she still shows up very often and has become one of Katou's most prominent roles. It's also become a role that Katou loves because Siero is such an oddball, and Katou goes out of her way to help promote the game and do voicework for Siero in promotional material and whatnot, leading Siero (and, by extension, Katou) to become one of the faces for Granblue in the zeitgeist. She even later got to show off her acting chops as both Halluel and Malluel in the fourth anniversary event "Paradise Lost" - in which they both sound completely different, and both different from Siero.

On top of all that, in 2013 she was chosen to voice Fluttershy in the Japanese dub

of My Little Pony: Friendship Is Magic. And that's where the memes begin.