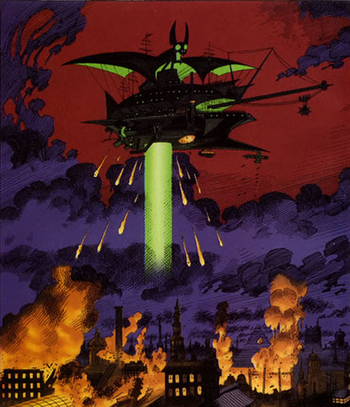 Uh oh! Here comes the Badyear Blimp.
"But regardless, we have an advantage that they sorely lack — ZEPPELINS!"
— The Major, Hellsing Ultimate Abridged
Advertisement:

There's something about airships that makes them the go-to flying vehicles for villains (at least when black helicopters aren't available). Want to establish that a villain is extremely powerful and wealthy in a way that even a fancy yacht or private jet won't? Simple: show him looking down upon his puny subjects from an airship!

Part of the reason why this trope is so pervasive has to do with the history of the airship, starting with World War I. During that war, Germany used Zeppelins as bombers against Britain and France, and although they did relatively little damage they terrified Allied civilians. After the war, zeppelins were used as passenger carriers by Nazi Germany up until 1937. On the civilian side, blimps are often used for advertising, which ties into fears of power-hungry CEOS with massive egos.

Another reason for this is that airships just look intimidating, in a way that airplanes and helicopters don't. Their massive size

and slow, silent flight give them an ominous air, which naturally makes many writers and filmmakers fix upon them as vehicles for fictional bad guys.

Thus the airship became the go-to flying transport for all manner of fictional dictators, warlords, Sky Pirates, and other miscreants. This trope applies not only to airships in the real-world definition (powered lighter-than-air aircraft) but also to fictional vehicles that are called "airships" but use other means of lift, as are often found in Steampunk settings. It can, but need not, overlap with Cool Airship and Zeppelins from Another World.

Has nothing to do with Led Zeppelin. Or the bizarre reggae-rock Led Zeppelin cover band that shares a name with this trope.