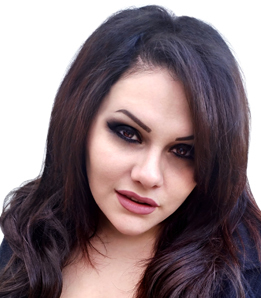 Time to tip the scales!
Advertisement:

Ah I see, so you wish to learn about Lauren Landa?

Well for starters, Lauren Anne Landa (born June 9, 1988) is an American voice actress born in Thousand Oaks, California. She mostly accompanies her good friend Cristina Valenzuela (and in fact, rarely seen in media without her). Her voice varies, although she mostly finds herself as buxom, sometimes seductive ladies with good candidates for being the Ms. Fanservice of the show she's in, but she is also capable of voicing young boys, or even those considered Hot-Blooded for a girl.

Although accompanying Valenzuela for quite a bit, she started receiving much attention after confirmed to be the voice Litchi Faye-Ling AKA Boobie Lady, but her boost was not as big as Valenzuela's. However, it was enough to become her Star-Making Role, later solidified and compounded when she was picked to play Kyoko Sakura. She has since started to get more roles and being more active in the industry with roles in Madoka Magica and the new voice of Kasumi in the Dead or Alive franchise.

She also occasionally works with Funimation, a Texas based anime distributor and dubbing studio, since making her debut with them in the English dub of Attack on Titan.

Notable roles by her:

Okay, lesson over, the index is--
More, Ms. Landa! TEACH ME ABOUT BAZONGAS!!!
W-whoa! Don't go shouting things like that!
How can you protect Mr. Mercer if you can't protect yourself?
Anyway... Hey, Taxi!