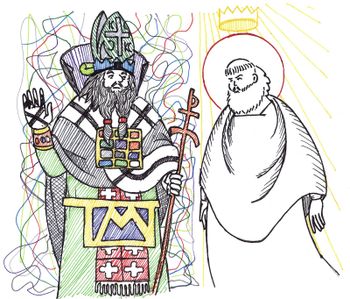 "A man shall be known by his learning: but he that is vain and foolish, shall be exposed to contempt."
Image by Bojan Teodosijević

, used with permission
"I follow all of God's teachings to the letter. The teachings of men who claim to know God is another matter."
— Amadeus Johnstone
Advertisement:

This trope happens often in series where the main villain is The Fundamentalist, but the author doesn't want to imply that Religion Is Wrong or Belief Makes You Stupid. Instead, a sympathetic character is shown as being religious, but as rejecting the flaws of the religious villains, such as corruption or intolerance. The hero may call out the villain's restrictive or intolerant doctrines, and say that God/the gods/Cthulhu would be ashamed at what is being done in their names. Often done by The Heretic and accompanied by phrases like "Jesus wants us to love everyone."

Done well, it's an aesop about how people are people and there is a fundamental core of reasonable humanity in every institution. Done poorly (usually because the sympathetic character is blatantly incorrect in his knowledge of relevant scripture, making him more offensive than The Fundamentalist to true believers) it can read as a weak attempt to not lose a substantial number of readers who may be religious.