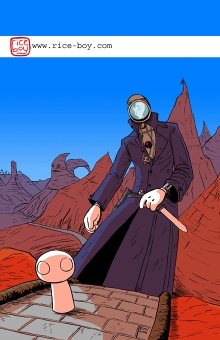 "I'm just Rice Boy. I don't know what I'm supposed to do. All I can do is grow plants and watch sunsets and listen to stories."
Advertisement:

is a surreal fantasy comic by Evan Dahm. It began April 1, 2006, and finished May 14, 2008. It was the first comic set in Overside. The comic is available as a webcomic, in softcover, and in hardcover.

The One Electronic is a mechanical man on a Mission from God: he is searching for the Fulfiller of the Prophecy of Ridrom, and he will not die as long as he continues searching. Unfortunately, T-O-E has been searching for 3,000 years, and every candidate for the position of Fulfiller has been a spectacular failure. When his latest candidate dies, T-O-E once again finds a replacement: the humble little pawn-shaped Rice Boy.

The only problem is Rice Boy says he can't do it.

T-O-E grows despondent and begins doubting his mission, while, unknown to him, a number of events are set in motion: Spatch II, the son of the last candidate, convinced that he himself is the Fulfiller, prepares to kill the new candidate and to wage war. To this end, he begins amassing an army, and he hires the Bounty Hunter Golgo to shadow T-O-E.

Meanwhile, Rice Boy decides he's a little bit curious about this Prophecy, so he sets off to learn more...

What ensues is a classical hero's journey story with many twists, played by a cast of strange creatures and set against the background of a surreal land.

After the conclusion of Rice Boy, Dahm began other webcomic series based in the same world. Order of Tales, which is now completed, is a loosely-connected prequel to Rice Boy. The third and current webcomic set in Overside is Vattu.

The world of Overside has a wiki

Not to be confused with the straw teenage driver of a Rice Burner.