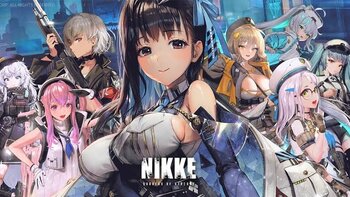 Goddess of Victory: NIKKE is a mobile free-to-play Science Fiction Third-Person Shooter Role-Playing Game developed by Korean developer Shift Up (previously known for their work on Destiny Child) and published by Level Infinite. It was released worldwide on November 3rd, 2022 for iOS and Android.

It is the far future. Mankind, after a long and deadly war against extraterrestrial robots called "Raptures", has lost control of Earth's surface. Leaving behind a post-apocalyptic hellscape ruled by the alien machines, the remnants of humanity have fled underground, constructing a massive, technologically-advanced bunker called the Ark. Over time, humanity has developed a way to counter the might of the Raptures: Nikke, combat-ready androids in the form of beautiful women who take to the surface and eliminate the Rapture with the assistance of the human Commanders trained to lead them.

You take the role of a rookie Commander fresh out of military training who is suddenly thrust into the heat of battle when an aerial transport suddenly explodes, killing the present senior Commander. Taking control of a Nikke squad called "Counters", the Commander sets out with Counters to defeat humanity's greatest extraterrestrial threat and discover the truth behind the Raptures.

During gameplay, players take control of a squad of Nikkes, pit against an onslaught of enemy Raptures. Players can direct the squad to aim and shoot at Raptures to destroy them using their finger to direct an on-screen crosshair to target vulnerable foes or order the party to defend themselves. Nikkes come in multiple roles, each specializing in different weapons with unique use cases for each unit, allowing the player to strategically build their team to combat any threat. In addition to the main Campaign mode, where players tackle the story, they can challenge a variety of side modes via the Ark, including the Simulation Room, a Roguelite mode where players defeat waves of enemies and collect buffs to power up their team, and Tribe Tower, a high-difficulty mode where players duel against increasingly tough enemies to see how far they can go.