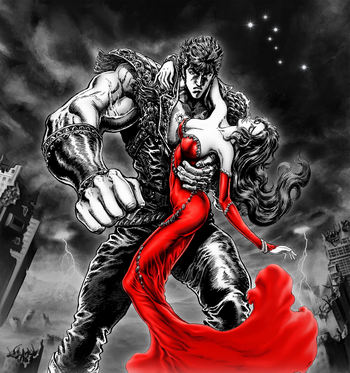 The legend of Hokuto Shinken unfolds like you've never seen it before.
Xsana: What can Eden grant a man of such power?
Kenshiro: I need to search your city for a woman who is named Yuria...that is all I ask.
Advertisement:

Fist of the North Star: Lost Paradise, released in Japan as 北斗が如く (Hokuto ga Gotoku, lit. Like the Big Dipper) is a video game based on the anime and manga series Fist of the North Star by Tetsuo Hara and Buronson. The game was handled by Sega's Yakuza team. The voice cast from the Yakuza series filled similar roles in the game, including Takaya Kuroda (best known as Kazuma Kiryu) as Ken himself. It was released in Japan on March 8, 2018 and in North America and Europe on October 2, 2018 as Fist of the North Star: Lost Paradise. The Western release also features dual audio, letting you switch between the original Japanese voices and the English dub.

The game features a completely new storyline set during the first series of Fist of the North Star. In it, series protagonist Kenshiro travels to the city of Eden, a place where civilization still exists even after the global nuclear war that plunged the Earth into its current state of anarchy. Within Eden's walls, people live in comfort thanks to an inexhaustible supply of water and electricity being taken from "Sphere City", a relic of the old world. This blessing allows Eden to thrive not only as a place of easy living but as a place of entertainment as well. Kenshiro has traveled here hoping he might find Yuria, his True Love, beyond Eden's gates.

Since this is a Fist of the North Star game developed by the team behind the Yakuza series, players can expect some of the best parts of both worlds here. During his stay in Eden, Kenshiro can pummel some unlucky Mooks to bloody explosions with his Hokuto Shinken before taking a part-time night job as a bartender mixing drinks, for example.

You can see the announcement trailer

for the game. The TGS Trailer.

"You are already dead."