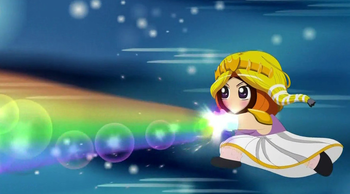 "I was gonna say... let's use aggressive fist-to-face sparkles!"
— Glimmer, She-Ra and the Princesses of Power
Advertisement:

This doesn't necessarily mean that the user is a girl, just that the power/s have a certain sort of girlyness to them. Sometimes the super cute power is parodied in-universe by showing itself to be useless, leading the other characters to exclaim "What Kind of Lame Power Is Heart, Anyway?". However, if the cutesy power is useful with a creative user, then it falls under Heart Is an Awesome Power.

Just about any Magical Girl counts, even Magical Girl Warriors, with sparkles, love hearts, frills and bubbles galore. Averting this tends to be the exception.

See also Heart Beatdown (which tends to look cute, but it's not really a subtrope, since its concept is "weaponized power of love") and Care-Bear Stare.