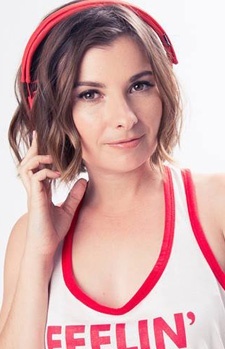 Huh, so that's what Ritsu looks like when she's grown up.
Advertisement:

Cassandra Lee Morris (born April 19, 1982) is a voice actress known for her anime and video game roles along with her audiobook narration. Perhaps her best known roles are Ritsu Tainaka from K-On!, Kyubey from Puella Magi Madoka Magica and Morgana from Persona 5.

She's not a newcomer per se, as she had years of experience and worked with NYAV Post and (infamously) 4Kids Entertainment (one of her first roles being Yubel of Yu-Gi-Oh! GX), it's just that her role as Ritsu is what made her well known within the anime fans. She is often cast alongside Bryce Papenbrook and Cristina Valenzuela.

When she's not doing any voice acting, she's also a writer and editor in About.com in Prom And Formal Dances

Her resume consists of large variety of characters. Ranging from Action Girls, Genki Girls, comic reliefs, villains, a Magical Girl Mentor Mascot, and an An Ice Person who is in love with her guarded man, a girl who has a badass elven warrior avatar, or a normal girl with attitude.

Her husband since 2016, Steve Shebby, is a songwriter and producer.

Too many roles, are there?

Hey, you must be tired after reading this page. Why don't you go to bed, Troper? We've got a long day ahead of us."