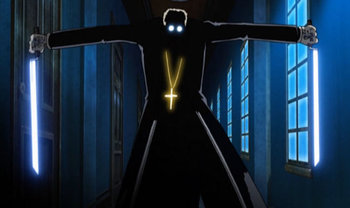 Amen.
"Catholicism is not a soothing religion. It's a painful religion. We're all gluttons for punishment."
— Madonna
Advertisement:

Light and darkness play an important role in every religion. When it comes to Christianity, however, Catholicism is by far the most associated with dark elements, including exorcisms, evil hidden behind a collar or more mundane ones like corruption and a very controversial history (which, however, isn't uncommon when it comes to religion). Unless these things are portrayed as literal light, in which case it's all light.

Creepy Catholicism embraces the description of Catholicism either as simply uncanny and dark or outright criminal and corrupt, especially if compared with other religions. This portrayal is typical of countries characterized by a Protestant majority. Once the Protestant Reformation got going, many Catholic traditions were suppressed. The sort of very bloody and gory art (crucifixes, frescoes of martyred saints, etc.) and ostentatious church decor popular among Italian, Spanish and Latin American Catholics, for example, can be quite shocking to someone from one of the more austere Protestant sects that favor plain wooden crosses and unadorned churches.

So if a writer wants to evoke the sort of mood and creepy factor of a pagan sacrifice or incomprehensible witch-doctor ritual, yet make it Christian, then the creepier sort of Catholicism is the way to go, especially once you toss in some Ominous Latin Chanting.

Truth in Television much of the time, since Catholicism retains many of the "otherworldly" traditions discarded by Protestant churches (the aforementioned Latin chanting, exorcisms, Purgatory, transubstantiation), some of which might seem like something straight out of a horror film to non-Catholics, especially children. That isn't to say that certain Protestants don't also have some spooky beliefs and rituals (snake-handling, speaking in tongues, the Rapture, beliefs about demons, some more exorcisms, etc.). And of course, more knowledgeable Catholics might point to Orthodox Christianity as being even spookier: besides keeping the same beliefsnote The only significant differences between Catholic and Eastern Orthodox are whether the Pope in Rome is supposed to be the head of the Church or just first (if that) among equals among several different leaders, and an incredibly arcane dispute about whether the Holy Spirit "proceeds" from the Father alone or both the Father and the Son—and the Orthodox themselves are split on how important this latter doctrinal issue is, with those emphasizing the difference between them and the Western Church calling it all-important and fundamental and those emphasizing commonality with the Western Church considering it a mere quibble. The Oriental Orthodox churches and Churches of the East also quibble with the Eastern Orthodox and the Catholics on arcane metaphysical points of doctrine about the nature of Jesus and the Trinity that (1) appear picayune in light of the gulf between all of them and Protestantism and (2) merely confirm the otherworldliness of their orientation. and medieval trappings — and then some — you think the chanting is ominous when it's in Latin? Try it in archaic Greek, or Syriac, or Old Slavonic, or Coptic (which is Ancient Egyptian with some Greek tossed in), plus people prostrating themselves and hermits going into really weird kinds of meditation.

Catholics in general were historically also more open to science and magic (relatively, of course; one can list many heresy cases for either, after all), having an extensive number of scientists and alchemists under its name, so it is a lot easier to demonize Catholicism as demonic or "false Christian" than other Christian groups, which often tend to reject science and/or magic.

Counts as Religious Horror if the work focuses on it. Creepy Cathedral and Hollywood Exorcism are generally associated with this trope. If a Pedophile Priest or a Sinister Minister appears, he'll probably be Catholic (but not always). May have something to do with Christianity Is Catholic. Anime Catholicism may overlap with this trope.