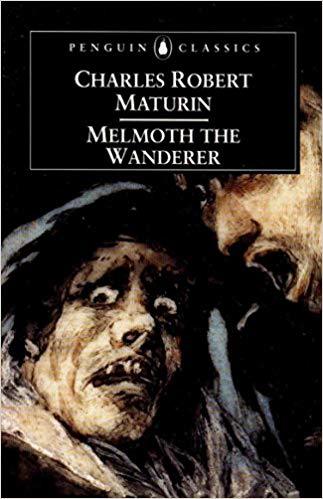 Melmoth the Wanderer by Charles Robert Maturin was published in 1820, at the end of the "classic" period of Gothic Literature and Romanticism in literature.

In 1816, young John Melmoth returns to his dying uncle's house to hear the story of John Melmoth, his ancestor, who lived in 1664 and is still living. While he is rescued by a Spaniard during a storm, the Spaniard, Alonzo Moncada tells him his own story as a reluctant monk during the Spanish Inquisition and his efforts to escape from the violent priests, and how he is involved with old John Melmoth, the ancestor, also known as Melmoth the Wanderer. Old Melmoth had sold his soul to the devil in return for 150 years of life and supernatural abilities - to travel fast, through doors and prisons. There is one way he can get out of the contract: if he gets another person to exchange their soul for his. Melmoth preys on those in difficulties and offers to help them out if they sell their souls instead. However, he is unable to persuade any of his victims to do so and dies at the end in damnation.

Melmoth the Wanderer contains examples of the following tropes: