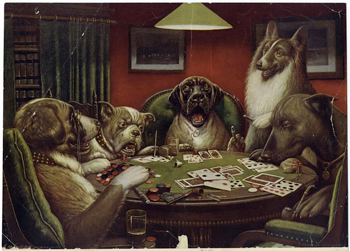 From the "Dogs Playing Poker"

series by C. M. Coolidge.
"Moviegoers who knowingly buy a ticket for 'The Mummy: Tomb of the Dragon Emperor' are going to get exactly what they expect: There is a mummy, a tomb, a dragon and an emperor. And the movie about them is all that it could be."
— Roger Ebert's review

The title comes from the long-running "Does Exactly What It Says On The Tin" TV advertising campaign for Ronseal Quick Drying Woodstain, a British product for staining wood, which is known to dry quickly (and other Ronseal products, but the woodstain was first). More on which may be found

This trope is only for titles or names given deliberately by authors or marketers. All Real Life Examples go in Titles or Advertising section. This is not a trope for the names of things in general.