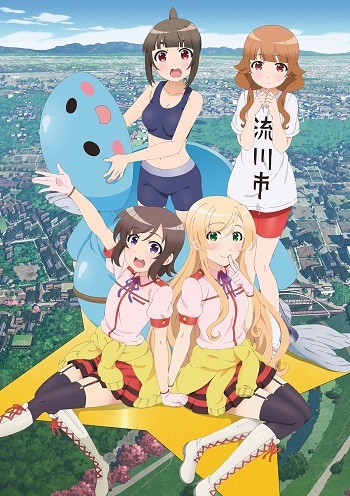 From left to right, back to front: Yui, Mirai, Nanako and Yukari
Advertisement:

Locodol (Futsū no Joshikōsei ga Locodol Yattemita) is a 4koma comedy series written and drawn by Kōtarō Kosugi. Locodol is serialised in Manga 4-koma Palette and has been running since 2011. There are two compiled volumes and an anime adaptation that was produced by Studio Feel, which aired as a part of the Summer 2014 Anime line-up. Two OVAs were subsequently released; the first was broadcast in the Fall 2014 Anime season, and the second was a Christmas Episode that aired on Christmas Eve during the Fall 2015 Anime season.

Nanako Usami is approached by her uncle to become a local idol, or "Locodol", in order to help revitalise Nagarekawa when it begins to experience a decline in tourism. An ordinary high school student, Nanako is initially unsure as to whether or not she would be able to fulfil this task. She's partnered with upperclassman Yukari Kohinata to form the idol unit, Nagarekawa Girls, and with Yukari's encouragement, Nanako agrees to help her uncle out. Yui Mikoze, who acts as the local mascot, and Mirai Nazukari, who serves as Yui's substitute, later join the Nagarekawa Girls. Together, the girls use their talents to promote Nagarekawa, taking on the responsibility of bringing their hometown out of its economic slump and generating excitement in their region's specialities amongst travellers to put Nagarekawa back on the map.