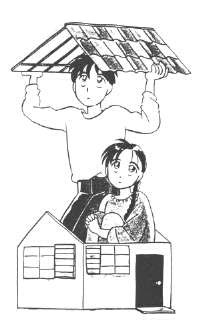 Living Game is a Seinen Romantic Comedy, which ran 10 volumes from 1990 to 1993, and is set over the same time period. Raizo Fuwa, the protagonist, is a 25 year old Salaryman for a small direct shipping business in Tokyo, during the end of Japan's economic boom of the 80s. After his company's office is condemned after an earthquake because of unsafe construction, he's pressured into moving the entire business into his small apartment until they're able to find a new location. At the same time a new employee arrives, 15 year old Izumi Hiyama, a high school dropout, who Raizo's boss has promised to look out for as a favor to her family. After Izumi's first apartment is torn down for new construction, she has to move in with Raizo as well, because nobody else will rent out an apartment to a 15 year old. Raizo now has to juggle literally living at work, a rapidly declining economy, and a teenager with an obvious crush on him.

Living Game is most notable for its dedication to averting most of the common Japanese romance genre tropes. Because the main couple begins living together very early in the series, a lot of the conflicts are about things that could be expected for newly-weds to deal with, such as lack of personal time because of work, money worries, and deciding whether to take that better-paying job or follow your own selfish dream. Especially considering the age gap between Izumi and Raizo, it's a surprisingly touching and sensitive story.