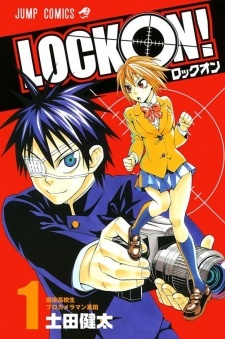 Lock On! is a short-lived shonen manga by Kenta Tsuchida. Originally starting as a one-shot, it was later serialized in Weekly Shonen Jump from February to June 2010 for 18 chapters.

The story follows Kurihara Niko, who Does Not Like Men, as she becomes friends with Sanada Utsuru, a Chivalrous Pervert who is a professional photographer at the age of 17. After transferring into Niko's class, Sanada decides to start a photography club with Niko's friend, Yuki. Sanada also has a special power called "Shutter Eye," which he can use to remember everything he sees perfectly.

Lock On! provides examples of: