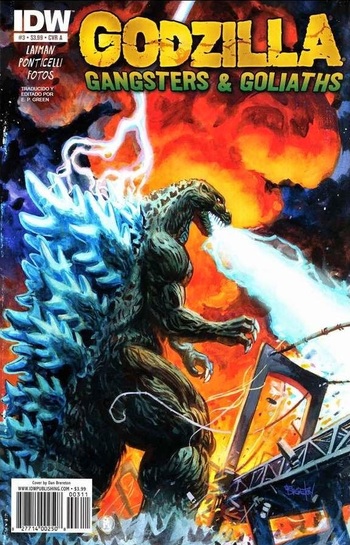 In 2010, IDW Publishing acquired the rights to make a series of Godzilla comics, this time featuring a good chunk of Godzilla's classic adversaries. There have been three ongoing series along with several mini-series. Gangsters and Goliaths is the first mini-series and published in a collection in 2011.

Detective Sato has a problem: he is trying to bring down the head of a crime family in Tokyo, but he is the only honest cop around. After an attempt on his life, Sato washes up on an island inhabited by giant monsters. The monsters will pick fights with one another but Mothra and the Elias are able to control the balance and keep the fighting to a minimum. Sato may have found a way to take the fight to the criminal empire with Mothra, but, as her duties on the island are neglected, balance begins to crumble.

What good is taking the crime out of Tokyo when there is no Tokyo left?

The series trope examples include: