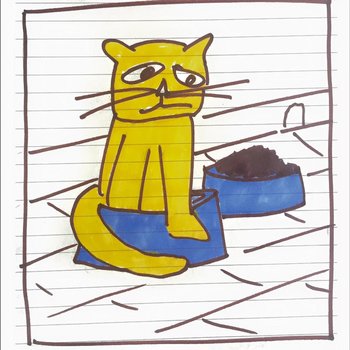 Our protagonist, Dum.
"Dum Cat is a dumb cat who has problems making it through the day."
— Series Tagline
Advertisement:

Dum Cat is a single-paneled wordless webcomic series about a dumb cat who does dumb things, most often being dangerous behavior. The series is understated in its premise, largely basing its artistic value within its underlying themes. The series is drawn and run by an artist only known as D.

The series began officially on April 1st, 2013, the latest post being on April 22nd of 2016. As of now, the series appears to be on hiatus, but the artist has stated to be planning on producing a feature-length book along with Dum Cat merch. There are 65 issues to date.