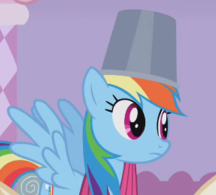 Twilight insisted I use this picture. She was giggling when she put it up...
Advertisement:

Okay, so, this is gonna take a bit of explaining.

So Twilight has been going on and on and on about this thing called Homestuck. I know, like, nothing about it but apparently it’s the best thing to happen ever since zap apple jam. This is normal for her, and I accept this. Twilight gets really freaking into things, and I have accepted that as an integral aspect of our friendship. Eventually she gets over it and moves on to some other nerdy thing to obsess over.

Thing is, it’s been like a month and she still won’t stop talking about it. So we broke a deal. Twilight is no longer allowed to talk about Homestuck, but in exchange I’ve gotta read it.

So yeah, You guys get to hear my super-awesome opinions of this comic thingiemabobber. Yay. Twilight dug up this old picture of me and is making me use it as my avatar. Apparently I’ll get the joke later? I dunno.

What the hay have I got myself into…