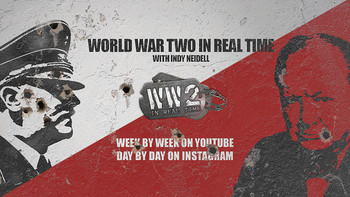 is a YouTube historical documentary series recapping the events of, well, The Second World War as they happened in real time, week by week, exactly seventy-nine years after the events. It is hosted, written, and produced by the trio of Indy Neidell, Spartacus Olsson, and Astrid Deinhard, who were part of the crew responsible for The Great War, with help from a crew of their own and in collaboration with other historians and youtubers.

Series produced by the channel

The team also runs a sister channel called TimeGhost History where it's Between 2 Wars series, that covers topics in the Interwar years, acts an Interquel to both this and The Great War.