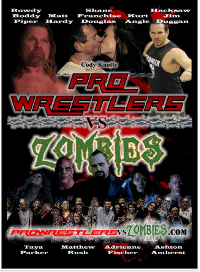 Good old American violence.
Pro Wrestler vs Zombies is a 2013 movie that, well, pits professional wrestlers against an army of zombies. The plot is paper-thin, involving a man named Angus (portrayed by a local Pittsburgh wrestler, Ashton Amherst, and dubbed over by another actor with an atrocious Irish accent) booking a number of professional wrestlers for a private exhibition and siccing an army of zombies on them seemingly in revenge for Shane Douglas breaking the neck of Angus's brother during a wrestling match with a botched piledriver. The film had its first showing in the United States on November 22nd, 2013 in Uniontown, PA after being shown in England and Germany. The film features Roddy Piper, Kurt Angle, Matt Hardy, Shane Douglas, "Hacksaw" Jim Duggan, Facade, and Reby Sky as themselves as wrestlers as well as many others.