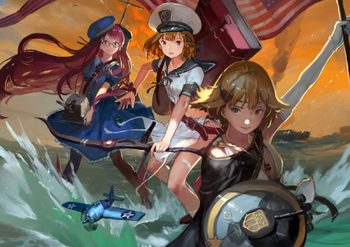 America's fightingest ships, now in Moe Anthropomorphism form! (Specifically, this is the cover of the Japanese version of Volume 1.)note From left: Mahan, Enterprise, and Maury.
"It was like watching a black hole. Whatever fleet elements we sent in simply disappeared, never to return."
— Cmdr. Cole Davis describing the first Abyssal encounter, June 26, 1950
Advertisement:

Pacific: World War II US Navy Shipgirlsnote  This is based on the title used on the Chinese versions of the artbooks. (aka Pacific: US Navy Fleet Collection or simply Pacific) is a KanColle fanwork by ''Morgane of the Mists''

and mainly illustrated by ''November/Jeanex''

. What began as a small Play-by-Post Game and collection of fan artwork by a small handful of people is now an Alternate Universe Fic/ Expanded Universe to the main Kancolle game by adding ship girls from other countries, in this case mainly from the United States Navy. Or, at least, that's the basic premise. It is currently at two volumes, with the second volume still in the process of being fully released as of September 2015.

In addition to the main work, several supplementary materials have been announced or released. The first is Action Report, a Concept Art Gallery in book form which deals with things like additional backstory, lore of the Pacific universe, and the authors' interpretations of their characters, as well as concept art of the various ship girls. The second is Aeronautica, which features several types of aircraft such as the F6F Hellcat, F4U Corsair, and BTD Destroyer, in addition to featuring things such as the supply fairies for the American ships. As of December 2015, Aeronautica has been released in physical copy form, with Action Report, Volume 2 currently being released both physically and digitally.

The story begins during the start of The Korean War, where the Abyssals make their first move on humanity in the form of a single destroyer. When the United States Seventh Fleet at the time try to fight the threat (assuming it was something the Reds with Rockets were up to), they are subsequently wiped out in a Curb-Stomp Battle, with the handful of survivors of these encounters eventually losing all sanity. Just when all hope seems lost, the first ship girl, in the form of a Moe Anthropomorphism of the battleship USS Iowa, appears and saves the day by single-handedly defeating the lone Abyssal scout. From there, the US Navy decides to establish the Special Task and Evaluation Command (STEC), and more ship girls, starting with New Jersey, begin to appear and give humanity a glimmer of hope.

The first volume can be viewed in its entirety here

. An English version has been released

The partial second volume can be viewed here

. Alternatively, you can download an e-copy for free at dropbox

In addition, you can view more artwork at danbooru

and the latest updates and discussions at this Himeuta thread

Now has a character sheet which can be seen here.