Comic Book / The Girl with the X-Ray Mind 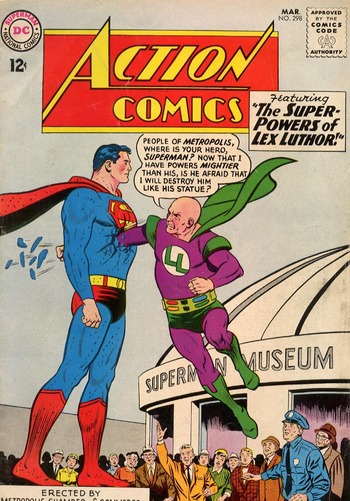 The Girl with the X-Ray Mind is a Supergirl storyline published in Action Comics 295-298 (1962-1963) and authored by Leo Dorfman and Jim Mooney.

Supergirl meets a strange girl named Lena Thorul, who has weird psychic powers. Since her new friend is facing difficulties in finding work since she is an orphan with no known family, Kara decides to investigate her background. Unexpectedly, she discovers Lena's birth name is Lena Luthor. She's Lex Luthor's little sister, whose parents changed their family name and moved out of Smallville to avoid association with him when Lena was a toddler. Shortly after, Jules and Arlene Luthor died in a traffic accident, and Lena was raised in an orphanage. Kara confronts Luthor, who admits Lena is his sister and asks Supergirl to not tell Lena anything. Lena has no memory of him or her parents, and she does not need the burden of being a Luthor.

Moved by Luthor's unexpected selflessness, Kara agrees to keep his secret, and she starts spending time with Lena. Meanwhile, her oldest enemy Lesla-Lar is scheming a new ploy to take revenge on Supergirl and conquer the world, and the criminals of the Phantom Zone are putting in motion a plan to wipe humanity out.

This story introduced the idea of Superman's cousin being friends with Lex Luthor's little sister, which would be used by the Supergirl (2015) show.