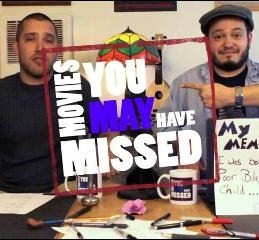 What's your favourite film that NONE of your friends have seen?

Movies You May Have Missed

is a website dedicated to showcasing the lesser known classics that may have passed you by. Hosted by Juan Carlos Bagnell and Lee Buckley, MYMHM attempts to promote films that they feel need a bit more love.

Every week the duo take on a new movie that they feel, despite often not being perfect, deserves a second chance from film lovers. While they never take things too seriously, they do make a point of choosing films they genuinely enjoyed, rather than selecting a host of So Bad, It's Good movies. Juan and Lee discuss why they each enjoyed the feature and why it didn't achieve any mainstream success, often talking about elements of the movie that may appeal to some but put off others.

Feel free to take a look at films on TV Tropes' own Needs More Love page, too.