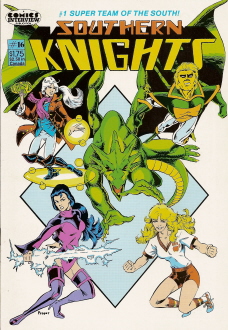 Southern Knights was a black and white indie comic released in the mid-80's. It concerned a group of superheroes who protected Atlanta, Georgia from the forces of evil. Notable for trying to stay true to old-fashioned superhero ideals while everyone else in the biz was getting all edgy. Near the end of its run the comic featured a multi-issue crossover with the comic based on the Champions game (though, it should be noted, after the makers of the game and comic had split up). The rights to Southern Knights now appear to belong to Heroic Publishing. In 2010, Heroic Publishing reprinted the crossover in the pages of Champions [and two issues of Flare Adventures], ending in the giant-sized 50th issue of Champions. This was done to reintroduce them to newer readers and serve as a test to see if they could debut in a new series.

The Southern Knights are: