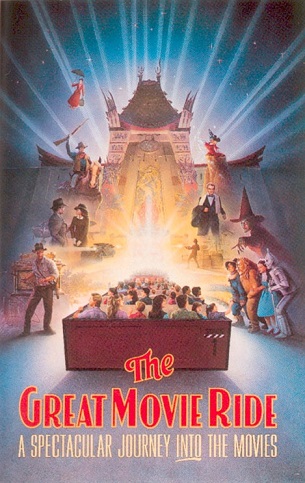 "A cast of thousands! A sweeping spectacle of Thrills! Chills! Romance!"
"Ready when you are, C.B.!"
Advertisement:

The Great Movie Ride was a dark ride that once served as the centerpiece attraction to Disney’s Hollywood Studios at Walt Disney World. Located inside a replica of the famous Hollywood Chinese Theater, the ride took guests on a journey through some of the most iconic movie moments throughout the history of the American industry, specifically from The Golden Age of Hollywood to New Hollywood.

In the process, riders have an encounter with a Xenomorph as well as the Wicked Witch of the West, and (depending on the ride) the vehicle at one point is even hijacked by either a western bandit (named "Kid Carson" or "Kate Durango") or a gangster (named "Mugsy")!

The ride was an opening day attraction at the park, which opened on May 1, 1989.

The attraction received very little alterations until 2015, when it was given update with the help of a new sponsor, Turner Classic Movies. The attraction was given a new co-narration by film historian/TCM host Robert Osborne, as well as a new preshow documentary film also narrated by Osborne (which replaced the old trailer loop) discussing the various films and genres showcased, and the attraction's closing montage was redone with TCM's help.

The update turned out to be short-lived, however, as after a 28-year run, the attraction was permanently closed on August 13, 2017, with its replacement being a very large-scale ride based on the current Mickey Mouse shorts, titled Mickey & Minnie's Runaway Railway, which opened in 2020.

Below are the films that had their own scenes in the ride (in order of appearance):

In addition to the scenes depicting the above films, the ride also ended on a big montage showcasing over a hundred films from Hollywood's vast history.

Tropes shown in The Great Movie Ride include: