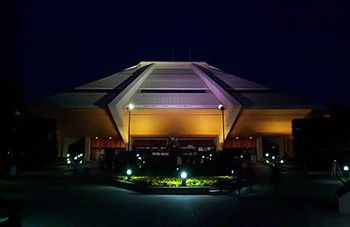 Take the Trip You've Always Dreamed Of
"If we can dream it, we can do it."
Advertisement:

Horizons was an attraction at Walt Disney World's Epcot from 1983 to 1999. Sponsored by General Electric (and conceived as a loose sequel to previous GE/Disney collaboration Carousel of Progress), Horizons was essentially the thesis statement for the entire park, touching on every theme discussed in the rest of Future World and a celebration of Futurism in general up to that point. However, loss of sponsorship, executive demand for more thrilling attractions, and most importantly structural problemsnote There was a large sinkhole underneath the structure that emerged in 1998, and there were some problems with the roof. It would have eventually collapsed under its own weight if it was left standing. resulted in Horizons being replaced by Mission: Space.

Upon entering the spacecraft-like building, guests would find themselves in the Futureport. Exotic locales that would appear later would be introduced here: The futuristic city Nova Cite, the desert farms of Mesa Verde, the marine resort Sea Castle, and the Brava Centauri space station. Boarding "Horizons-1", bound for the 21st Century, your narrators, an old married couple, first took you back to go "Looking Back at Tomorrow". This included scenes with Jules Verne and From the Earth to the Moon, a fanciful futuristic apartment as imagined in science-fiction of the 30s and 40s, and an abstract neon cineplex featuring footage from films like Metropolis, Buck Rogers, and Disney's own Magic Highways USA. After this trip down memory lane, guests enter an Omnimax theater showing examples of current technological and scientific advances such as microprocessors and genetic research.

From here, we enter the future and meet our narrators in person in their home at Nova Cite. Their children have grown up and are living in the other three communities, but with advanced transportation and communications, they're never that far away. We first travel to meet their daughter, one of the farming engineers at the reclaimed desert community Mesa Verde, monitoring the automated workforce. The narrators' granddaughter videophoning her boyfriend at the Sea Castle, serves as a transition to the next sequence. Marine research, new submersible technology, and aquaculture are discussed here. The last leg of the journey goes into space where we see the narrators' son and his family adjusting to the lack of gravity aboard Brava Centauri. The family story concludes with a birthday party for the narrators' youngest grandchild, something they can all come together for through holographic communications. Riders are then prompted to choose their own destination from the three communities of Land, Sea and Space, with a POV fly-through ending selected based on majority choice and the guests returning back to the Futureport.

Though it was dismissed as dated and hokey in its later years, Horizons remains one of the most beloved extinct attractions within the Disney Parks community. In its twilight years, two fans even went far enough to sneak off the vehicles and document as much as they could, their adventures being chronicled at the blog Mesa Verde Times

. An attempt at a virtual recreation called Horizons: Resurrected

was made, but didn't get that far into recreating the ride before being taken down (the provided link is a Wayback Machine archive), although the creator of the project intends to continue working on it and a 2019-published 360° YouTube video of the recreation can be found here.

Homages to the attraction have popped up throughout the parks from Mission: Space to Space Mountain and some props were sent to other parks such as both Disney Studios theme parks.

This ride provides examples of: