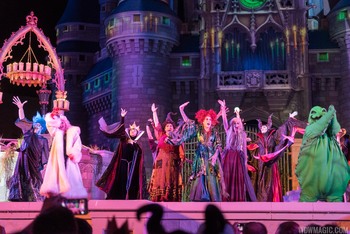 They put a spell on the Magic Kingdom, and now it's theirs.

Introduced in 2015 as part of Mickey's Not-So-Scary Halloween Party at the Magic Kingdom near Orlando, the Hocus Pocus Villain Spelltacular is a musical revue starring the Sanderson Sisters, of Hocus Pocus (1993) fame. Revived by mystical power of the Magic Kingdom, the Sanderson Sisters have come to run amoknote amok amok amok amok! for one All Hallow's Eve. But fortunately for Disney World's many underaged guests, the Sanderson Sisters aren't looking to drain anyone's life force this time. Instead, they're looking to create a magical "party potion" that will cast a sinisterly festive spell over the entire Magic Kingdom! But to succeed, they'll need help from some of the most dastardly characters from the Disney canon.