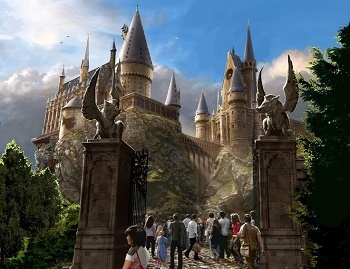 "His journey is now yours."
Harry: Don't worry, we haven't lost anyone yet.
Ron: Yeah. Not this week, anyway!
Advertisement:

Harry Potter and the Forbidden Journey is a simulator/dark ride hybrid that serves as the centerpiece attraction to The Wizarding World of Harry Potter: Hogsmeade at the Universal Studios parks.

In the attraction, Dumbledore is giving Muggles (the guests) a tour of the Hogwarts grounds, along with treating them to a long lecture about the history of Hogwarts. Thinking that would be too boring for the visitors, Harry, Ron, and Hermione decide to instead make their visit a bit more exciting by sneaking them out to a Quidditch game, via an enchanted flying bench. From there, things get sidetracked as chaos ensues in the form of a dragon, giant spiders, the Whomping Willow, and Dementors.

The ride first opened at Universal's Islands of Adventure on June 18, 2010. Its massive success prompted a duplicate to be constructed at Universal Studios Japan, which opened on July 15, 2014. Two years later, Universal Studios Hollywood finally received their own clone of the ride (that opened on April 7, 2016) after it spent a long period of time in Development Hell. A fourth version eventually followed at Universal Studios Beijing, opening with the rest of the park on September 20, 2021. The three duplicates of the attraction feature some minor differences to their original Orlando counterpart, such as having a much more overwhelming Dementor sequence. Also unlike Orlando, Japan and Hollywood's version of the attraction was presented in 3-D, but due to negative guest receptionnote Let's just say that having 3-D mixed in with the ride's motions ended up being a major source of Nausea Fuel for guests... it was later removed.

Tropes shown in Harry Potter and the Forbidden Journey include: