Ride / Harry Potter and the Escape from Gringotts 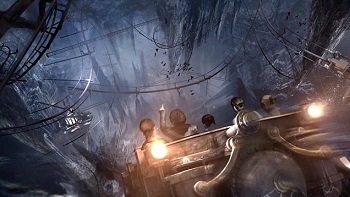 "Welcome to Gringotts! Perfectly safe, as you can see..."
— Bill Weasley
Advertisement:

Harry Potter and the Escape from Gringotts is an indoor roller coaster/dark ride hybrid that serves as the centerpiece attraction to The Wizarding World of Harry Potter: Diagon Alley at Universal Studios Florida.

The ride is set directly during the events of Harry Potter and the Deathly Hallows: Part 2 when Harry, Ron, and Hermione are breaking into Bellatrix's vault. Meanwhile, the guests are going down into the Gringotts Wizarding Bank, to find their respective vault. However, they run into Bellatrix, who initially believes that they are responsible for breaking into her vault. The riders are then sent into pure mayhem as the main trio along with Bill Weasley, desperately attempt to rescue them.

The attraction opened on July 8, 2014, along with the rest of the aforementioned Diagon Alley area, replacing the former JAWS ride.

Tropes shown in Harry Potter and the Escape from Gringotts include: