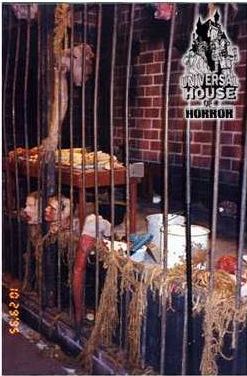 Come face-to-face with some of the most famous horror film legends...If you dare! (1995 description)
Visit this most uncommon wax museum where a lightning strike has had an electrifying effect on two new exhibits, "Universal Classic Monsters" and "Real Life Horrors". (1996 description)
The world's only museum where the guards have to warn the exhibits not to touch the visitors. Here all your favorite classic universal monsters and present day horror icons come to life munch to your dismay. (1997 description)
Advertisement:
Meet Frankenstein, Dracula, The Wolf Man and all your favorite classic Universal Monsters. (Chamber of Horrors description)
Put on your 3-D glasses, as some of Hollywood's worst nightmares literally jump off the screen of a neighborhood movie theater at Florida's first ever 3-D haunted maze. (1999 description)

Universal's House of Horror was a haunted house from Universal Studios' Halloween Horror Nights 1995, located in Soundstage 23. It consisted of two parts with one queue leading up to each; one part showcased classic horror movie monsters, the other showcased the newer monsters from more recent movies. It was followed by many sequels, namely:

In the first house, monsters included Frankenstein's Monster, Dracula, the Phantom of the Opera, the Hunchback of Notre Dame, and Dr. Jekyll & Mr. Hyde.

The story of the second house was that during the construction of a wax museum, lightning struck the house and brought the wax sculptures to life. It is known from concept art that one room the guests travelled through was the Borden bedroom, with the mutilated corpses of Lizzie Borden's parents. As the guests left the room, Borden herself would burst out of a closet wielding a bloody axe. Another room was an ancient Egyptian tomb, with two men uncovering a sarcophagus containing a mummy.

Not much is known about the contents of the third house, the first house to be located in Soundstage 22, only that one of the rooms was a lobby with brick pillars, candelabras, tables with dinnerware and cutlery laid out, and a painting. The facade to this house was not very elaborate, only a metal building with glass windows and a sign with the words "MUSEUM OF HORRORS".

1998 split Soundstage 22 in half to make two houses in one, with Unnatural History featuring modern movie monsters on one side and Chamber of Horrors featuring classic Universal monsters on the other. The beginning of Chamber of Horrors was an old, dusty house with spiderwebs hanging down from a sign with the words "DIE HERE". The corridors were lit with wall candelabras. At one point there was a spiderweb-covered organ followed by a woman with long, black hair looking out from a cavity in the wall covered by glass. Later on there was a scareactor wielding a knife threatening the guests and an alcove containing an old TV as decoration. After this was a mess of old furniture and crates, between which a madwoman looked out. Concept art also reveals that an old graveyard was involved at some point.

As for Unnatural History, at one point, a scareactor portraying Michael Myers could be found standing by the wall. Further into the house, Reagan from The Exorcist could be seen sitting on her bed as music from the movie played in the background. Later still a werewolf appeared followed by a zombie. Near the end of the house, Leatherface appeared soon followed by Ghostface from Scream. At some point, guests walked through a farmhouse modelled after Night of the Living Dead with a zombie bursting out of a mattress.

Universal's Creature Features in 3-D! was, as the name suggests, a 3D house. In fact, it was the very first 3D house in Halloween Horror Nights history, using ChromaDepth-style

3D. Not much is known about the actual contents of the house, however, only that according to concept art, the facade was that of an old-fashioned movie theater with movie posters covering the walls, a broken admission window, and blood running down the stairs.

Universal's House of Horror and its sequels contain examples of: