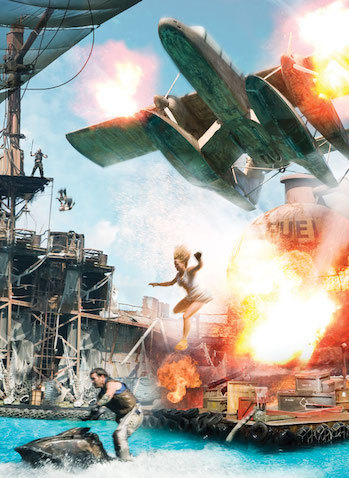 "The future — the polar ice caps have melted, and the continents are deep beneath the waves. The survivors live on these floating fortresses known as "Atolls" in this place called... Waterworld. Brave explorers voyage in search of a legend of dry land — the last remaining on the planet. But the Deacon, maniacal leader of a group of evil raiders called "Smokers", is determined to find dry land first. He's ensured that no explorer has ever returned... until now."
Advertisement:

Waterworld: A Live Sea War Spectacular is a stunt show that can be found at the Universal Studios parks in Hollywood, Japan, and Singapore.

The show acts as a sequel to the 1995 film, immediately picking off where it had ended, with Helen, having finally discovered dry land, arriving back at the Atoll, with intention of bringing her fellow crewmen back with her to the island. Unfortunately, it turns out that the Deacon and his Smokers have followed Helen, and intend to kidnap her so she can show them the way to dry land. They attack the Atoll and begin to kill its crew members, until the Mariner, main protagonist of the original film, returns to take on the Deacon once more.

The show was developed at the same time as the movie, with the intention that it would act as a tie-in to the latter. Although the film had infamously underperformed upon release, work on the show was already so far along that it was too late to cancel it. This ultimately ended up being a good thing, as the show opened at Universal Studios Hollywood on October 23, 1995 to rave reviews, quickly becoming one of the highest-rated shows in theme park history and one of Universal's most successful attractions — the polar opposite of how the film had fared. The popularity of the show prompted Universal to duplicate it to its Japan and Singapore parks; it opened with the parks in 2001 and 2011, respectively.

"And so the Deacon's threat has ended, and civilization may start anew on dry land, while the Mariner roams the four points of the compass on the endless seas of Waterworld."