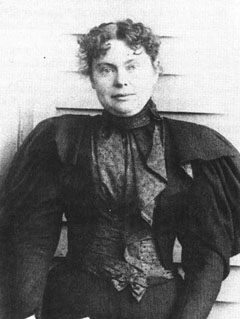 Lizzie Borden took an axe
Gave her mother forty whacks
When she saw what she had done
Gave her father forty-one
Advertisement:

You've probably heard this schoolyard rhyme at some point in your life. Actually, Lizzie Borden's (step)mother was hacked nineteen times and her father eleven. Also, Lizzie was acquitted of murdering her parents, but Convicted by Public Opinion. And the murder weapon was probably a hatchet rather than an axe. Other than that, the rhyme is very accurate. Or probably not. We'll never know.

In the late 19th century, Lizzie Andrew Borden (July 19, 1860 – June 1, 1927) was a grown woman living with her elder sister Emma, her father Andrew, and her stepmother Abby in Fall River, Massachusetts. Andrew was a successful banker, but lived well below his means. Normally, a woman of Lizzie's age and class would be married by now, but her father's miserly ways stifled her social life and severely limited her marriage prospects. Lizzie also had a difficult relationship with Abby, whom she regarded as a Wicked Stepmother and would only refer to as "Mrs. Borden".

On the morning of August 4, 1892, Abby Borden was hacked to death in an upstairs room of the Borden house. Later, Andrew returned home from his morning walk and fell asleep on the sofa, where the murderer hacked him to death too. The horrific incident quickly became a national scandal. When the murder happened, Emma had been visiting friends in Fairhaven and the only people known to have been in the vicinity of the house at the time were Lizzie and housekeeper Bridget Sullivan. The housekeeper had no apparent motive, so Lizzie emerged as the primary suspect. The public was enthralled. To Victorian sensibilities, the idea of a woman committing such a violent, physical crime was shocking. After all, everyone knows the Proper Lady only murders with poison.

To those who believe Lizzie was guilty, the trial was a farce and totally stacked in favor of the defense. It's alleged that she played the part of the good Victorian lady to the hilt, properly swooning at the sight of her parents' skulls and eliciting sympathy from the all-male jury. In any case, she was acquitted, but was never able to shake the reputation of being a murderer. It didn't help that the murder was never solved and no one else was ever tried for it.

For what it's worth, neither Lizzie nor Emma ever committed another crime on that level. After the trial, she and her sister moved in together and Lizzie became close to the theater scene. Thanks to their substantial inheritance, Lizzie, now going by Lizbeth, would frequently patronize various actresses. This, plus the fact neither sister ever married, led some scholars to believe both were lesbians, though there was never any solid evidence of that. Sadly, in 1905 the two had a falling out during a party Lizzie threw for actress Nance O'Neil and Emma moved away, never to see her sister again. In 1927, both sisters died, only nine days apart.

Over the years, Lizzie Borden has become Shrouded in Myth and has been featured in various works of media. In fiction, she's usually portrayed as being guilty. In more pulpy or comedic works, she's typically a Card-Carrying Villain, an over-the-top Halloween character with her trusty hatchet ever-ready for a new murder spree. In more serious depictions, she tends to be played as a Sympathetic Murderer, which necessarily involves portraying Andrew and Abby as Abusive Parents who deserved it. There are also various fantasy works that put a Beethoven Was an Alien Spy spin on Lizzie's story, often providing a supernatural justification for her actions, effectively side-stepping the real-life issues of the case. Whatever the truth is, there is certainly no shortage of theories.

A common trope in fictional depictions is to portray Lizzie as having committed the murders in the nude so that she wouldn't get incriminating blood stains on her clothes. Incidentally, the real Lizzie is known to have burned one of her dresses shortly after the murders. At her trial, she claimed that she burned the dress because it was stained with paint, but the prosecution obviously suspected that it was stained with something else. You'd think that if you were going to portray Lizzie as guilty, you'd just go with the prosecution's actual story, but fiction clearly prefers the explanation that involves nudity because of course it does. Not only does it promise to draw in more viewers, it's something that can be played for all kinds of symbolism. Plus, it makes the story that much more lurid.

Close the door!
Lock it! Latch it!
Here come Lizzie, with a brand-new hatchet!