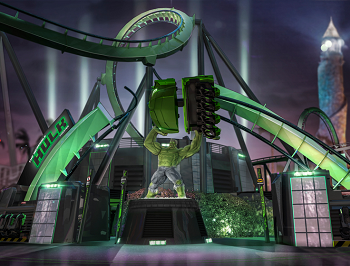 "Everything looks good! I think... I think this time... it's going to work!"
— Bruce Banner in the original launch sequence
Advertisement:

The Incredible Hulk Coaster is among the several rides that can be found at the Marvel Super Hero Island area at Universal's Islands of Adventure. It opened with the park on May 28, 1999.

The story behind the original version of the ride involved guests being in the middle of Bruce Banner's attempt at removing the Hulk from within himself. Once the guests would enter the "gamma accelerator tube", Bruce's experiment goes horribly wrong and "radiates" the riders themselves into Hulk, with them being launched from the tube at 40 mph into a roller coaster experience that simulates the feeling of having the sheer power of the Hulk.

The original version closed on September 8, 2015 and remained closed for almost an entire year as the coaster was entirely reworked, with the track being replaced, new on-board soundtrack being added in, and the ride's storyline being changed. The new and current version officially opened on August 4, 2016. The revised storyline revolves around Thunderbolt Ross, who in his attempts to put an end to the Hulk once and for all, has recruited the guests to undergo experiments that will change them into a superpowered being much like the Hulk.

Tropes shown in The Incredible Hulk Coaster include: