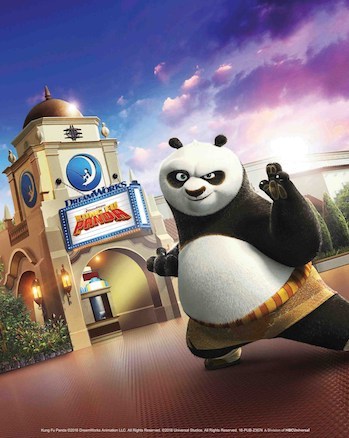 Kung Fu Panda Adventure is an animated simulator attraction based on the popular franchise. It is can be found at Universal Studios Hollywood, where it opened on June 14, 2018, replacing Shrek 4-D.

In its story, Po sets off on a river raft-based quest to deliver the "Liquid of Ultimate Power" to the Emperor, bringing Master Shifu, Mr. Ping, and the entire audience along with him for extra help. In typical theme park ride-fashion, they encounter multiple obstacles along the way when they are faced with a band of wolf pirates that want the liquid for themselves.

The attraction is set inside the "DreamWorks Theatre", and is intended to be the first of many DreamWorks Animation attractions to be shown in the venue. As a result the theater contains multiple tributes to all of DreamWorks Animation's films, including a pre-show that has Po interacting with some of the characters from Shrek, Madagascar, and Trolls.

The Motiongate Dubai park contains a similar attraction called Kung Fu Panda: Unstoppable Awesomeness, which is presented in 3-D and doesn't use the DreamWorks Theatre setting, along with having some minor plot differences.