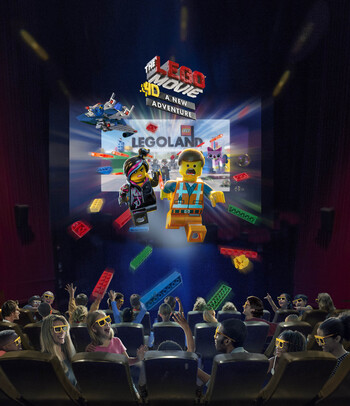 The LEGO Movie: 4D — A New Adventure is a 3-D Movie with in-theater effects based on The LEGO Movie released in LEGOLAND Florida on January 29, 2016.

Following the events of the film, Emmet brings his friends to LEGOLAND in hopes of visiting the park, but the invitation Emmet received is actually for Brick World, a completely unauthorized LEGO Movie theme park located next to (but not associated with) LEGOLAND. The owner of the park, Risky Business (who's President Business's brother), promises them a fun time at Brick World, but he secretly has evil plans to brainwash them and force them to work at the park in order to dominate the theme park industry. Can Emmet and Wyldstyle stop Risky's plans and rescue their friends in time?

The LEGO Movie: 4D — A New Adventure provides examples of: