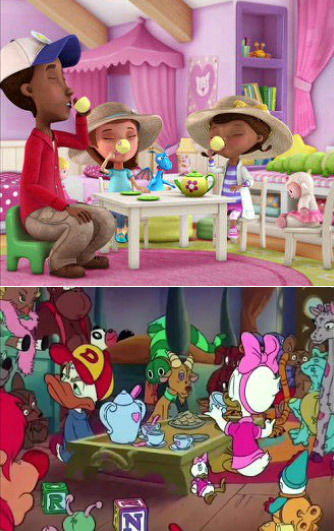 Top: Supportive Dad. Bottom: Unwilling Participant.
Webby: As soon as I'm done polishing my teapot, we can have a tea party with all my dollies!
Huey: Thanks for the warning.
— DuckTales the Movie: Treasure of the Lost Lamp
Advertisement:

There are children who are capable of self-entertaining. Leave them alone with a book or some toys, a video game console or even the television, and you won't have to worry about them for hours.

Then there's the child who invites you to The Dreaded Tea Party.

This child may be capable of self-entertaining but bored of it, they may be lonely and want real companionship, or they may just be a brat. Whatever the reason, plushies, toys and dolls around the tiny table all dressed up in their frilly, sparkly, pink finest are not enough and one more is needed to round out the attendance of the most important tea party in this child's life (for now).

The child who ropes others into The Dreaded Pretend Tea Party can be a genuinely sweet kid who just wants someone new/different to play with and honestly doesn't see why someone wouldn't want to play tea party; or a devious and conniving Bratty Half-Pint who either has something to hold over the head of the one they invited, or will throw a major tantrum to get what they want. Expect older kids and adults to attend only under duress and with an expression of resignation.

In more fanciful settings, the tea party host and/or their hostage doesn't even need to be human. A dog or cat with Amplified Animal Aptitude will do; or whatever other sentient being happens to fall in the child's scope.

Applied Phlebotinum or Shrink Ray may result in the protagonist and/or cast having been miniaturized to just the right size for little hands, resulting in the child discovering "new toys" or "playmates". Such a child in this case can be sweet, and will either understandingly free their new playmates, or a Spoiled Brat who must be tricked or distracted and will then throw a major tantrum at the loss of their new toys.

What it boils down to is that almost nobody older than a year or two beyond the child in question ever goes to play tea party willingly and must be coaxed, coerced, blackmailed or forced into it one way or another. This is especially true for grown men — the tougher they are, the more they will resist. The visual cues that accompany this reaction support the resistance: Pink Means Feminine. Pink Is for Sissies. No self respecting guy (unless he's a dad and it's his own daughter, or maybe a guy who believes Real Men Wear Pink) will want to humiliate himself in a girly pink environment.

Resistant or willing participant aside, at the core, the kid hosting the tea party really just wants someone to play with, no matter how cruelly or sneakily or viciously they go about making that happen. The "dread" of any older kid, adult or creature at participating is the idea that adults should not ever do anything childish, even for children they love; and if they do, they should only do it with a sense of embarrassment and humiliation. Unfortunate Implications ensue because the dread in teen boys and men comes from the idea that it's awful and terrible to participate in anything girly or feminine, and that such awfulness gets worse if their male peers should also see them doing such a thing, no matter how vehemently they protest having been forced into it somehow.

The "tea party" is the most frequently employed scenario, but sometimes the child is playing some other form of make-believe. The host of the tea party is almost Always Female, but there are the odd few boy examples.

The most common variation of the trope is frequently used in family programming with a father acquiescing to his daughter's wishes. He puts on the wig, makeup, and dress, sits at the tiny table and hopes his buddies don't see him. This is often used as shorthand for "Daddy really loves his little girl" and "is a supportive parent who doesn't stifle his child's creativity". If they're not trying for the Aesop about good parenting, Daddy has to be bribed into it by the sweet-but-clever child.

A variation that involves the same girly acoutrements and a resolved but unhappy dad is that the girl is working on a sewing project and he is being the dress form, Played for Laughs, as dad and daughter almost never are that close in body type.

This trope is quite rare in Asian works, especially in anime, as tea for them is considered Serious Business with tea ceremonies more prevalent than tea parties.

This trope has nothing to do with parents throwing their small children genuine tea parties with real tea and cakes. Not to be confused with Fantastic Voyage, despite the Shrink Ray being something both tropes have in common. Also should not be confused with the American historical event called the Boston Tea Party, nor the 21st Century American political movement calling itself the Tea Paty.

Related to And Call Him "George"!, where a character also plays with another one against the latter's will, but with more fatal consequences. The tea party is frequently seen in the company of the Slumber Party, where it's part of the agenda along with the makeovers. Compare with The Mad Hatter-style tea parties.