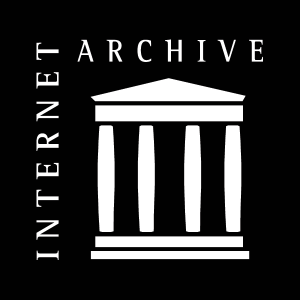 is by far the largest digital library and web archiving organization ever made. Their stated mission is to provide universal access to all knowledge, and in order to do that, they have created both a digital library, which is public file hosting system with content submitted by both the community and the site's staff, and, more notably, the Wayback Machine.
Advertisement:

The Wayback Machine, which is by far their most famous feature, is essentially a tool that allows people to see past, archived versions of web pages — in other words, it's the browser version of a Time Machine.

Here's how it works: After going to the Internet Archive's front page, users can paste a URL address on the input-box below the Wayback Machine logo and pressing "Enter". After that, the user is shown a calendar-like list of archived pages (provided there are any). Dates written on blue dots are links to versions of that particular page archived on that particular date. If a dot is orange, however, then it means that the URL was not found at the time of the snapshot, usually indicating the site was already gone by that time. Green dots, on the other hand, indicate that the URL led to a redirect.

It's also possible to use the WM to instantly archive any given webpage, too, simply go to the address https://web.archive.org/save/[url_of_the_webpage] to save the newest version in the archive.

That being said, though, the Wayback Machine is not 100% reliable. Sometimes, the particular page or image you remember most fondly will turn out to be missing from the archives either due to not many sites linking to it or, more commonly, due to it having a structure that's difficult to archive. Websites like DeviantArt as well as several Web Comic sites are notorious for being nigh-impossible to archive, meaning that once they're gone, they're, well, gone.

The Wayback Machine also used to follow the robots exclusion standard, so if your favorite website (say, like FanFiction.Net, which actually did block its contents from being archived) blocked the Wayback Machine from saving it in its robots.txt file, then it and its content became inaccessible to the public. Infuriatingly enough, if the domain was taken over by a cybersquatter who then implemented a robots file, it also blocked you from seeing the earlier, legitimate versions of the website. However, the abuse of robots.txt by these cybersquatters led to so many defunct websites losing their previous archives that the Internet Archive themselves decided in April 2017 to stop broadly honoring the standard, now requiring explicit requests for exclusion. They also stopped honoring the standard for crawling and displaying U.S. government and military websites from December 2016 onwards (a month before Donald Trump took office as President of the United States).

The IA also takes no chances with the law, and so all requests by the copyright owners to remove data from the Wayback Machine are immediately obeyed. .

As for the Internet Archive's digital library, although it is by comparison a lesser-known feature, it is still by no means lacking in content, as it is not only where the Internet Archive hosts the films, photos, and books they've digitized (they are a library, after all), but also it's widely used by archival initiatives such as the Archive Team as well as various users eager to either submit cool videos and such they found throughout the web, or upload their content somewhere secure. In fact, even us at TV Tropes are beginning to enjoy using this feature, as it allows for us to post important videos and webcomics and such somewhere where they are guaranteed to stay (unlike, say, Google Drive or MediaFire). It also helps that image files hosted on the IA can be viewed as part of their "preview" feature, this makes the Internet Archive even more useful for archiving things like webcomics, as they can already be read there on a surprisingly readable format without actually having to download them.

Oh, and yes, the Internet Archive is also behind archive-it

(not related to Archive Team), which is a paid subscription service that lets you run crawler projects of your own, which comes in handy if the site you want preserved isn't archived by the Wayback Machine for one reason or the other.

The Internet Archive provides examples of:

Fun fact time! If you're wondering why this page was created so recently, don't fret! We actually used to have a page on the Wayback Machine itself back in the day, but we then decided to turn it into a redirect to this new and improved page as per the Websites cleanup

project. Though you can still see what the page used to look like by — you guessed it — checking it on the Wayback Machine. We recommend you go to this

capture that was submitted by us tropers just before we deleted it.