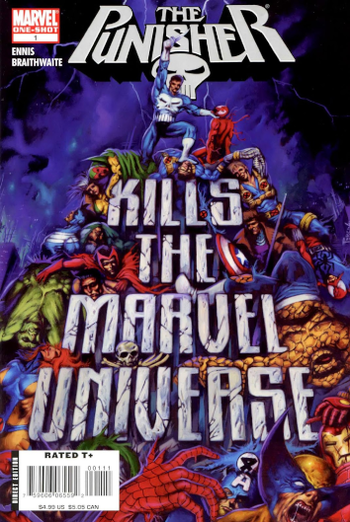 Now this is the way to solve the Superhero Paradox!
"We understand your anger, Mr. Castle. We have felt the impotent fury at the supermen who destroyed our lives, who forgot the pain they caused and hid behind their masks and capes and badges. But you: You dared to hit back. We want them all. The heroes and villains. The mutants and monsters. Anything that calls itself superhuman: We want you to kill them all."
— Kesselring
Advertisement:

A oneshot What If? comic from 1995, where The Punisher's personal war is not with criminals, but people with superpowers. Can you guess this was written by Garth Ennis?

Frank Castle's family dies when they're caught in the crossfire between superheroes and invading aliens at Central Park. Enraged by this, Frank kills the nearest superpowered individuals to him before being subdued, and is sent to prison for life. However, he instead ends being taken to a committee of people who also suffered great losses due to clashes between superheroes and villains. They promise to give everything he needs to kill all supers, and he starts systemically offing them.