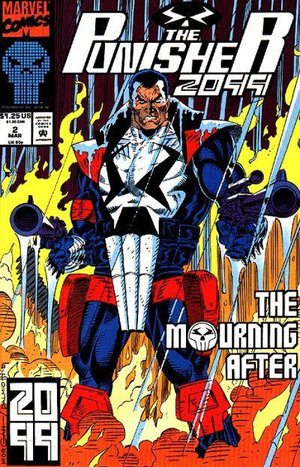 "Where do you live?" "On the edge."
"Who are you? You're no strolling citizen packing that hardware...."
"I'm the Punisher... and you're deadware!"
— The first issue
Advertisement:

When Jake Gallows' mother, brother and his sister-in-law were killed and the guy responsible got off easy, he decides take the law on his hands as the new Punisher. Since it is a dystopian future, '90s Anti-Hero tropes are abound.

In 2004 a one-shot alternate version was published as part of Marvel Knights 2099 which centers on Elektra Natchio and Frank Castles's daughter Cossandra, who has succeeded her father in becoming The Punisher. An alternate version of Jake himself is the catalyst of 2009-2099: Timestorm. The original made his return during Spider-Man 2099's portion of Spider-Verse, and later was chosen to be the Grandmaster's "summoner" in Contest of Champions (2015).

The Punisher 2099 provides examples of the following tropes: