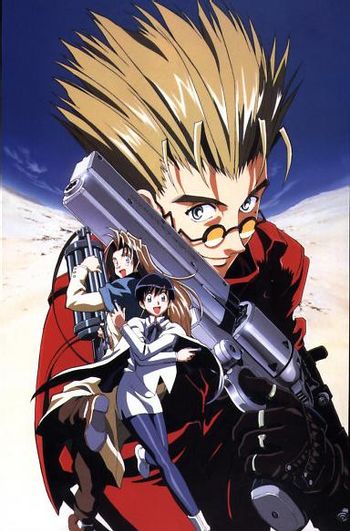 In 2010, Nightow started a modest series of new works for the Trigun universe in anticipation of the movie Trigun: Badlands Rumble. First it was a two-chapter story, going by the same name as the movie, drawn by Nightow himself to serve as a preview for the movie. The second was a one-shot, Trigun: Rising, it is a short tale about Rai-Dei the Blade, one of the original Gung-Ho Guns, drawn by Yuusuke Takeyama. The third, and final, was another one-shot, entitled Trigun: The Lost Plant, a story set 6 years after the original manga ending; it was drawn by Boichi and later published as an extra for the 12th volume of his own series, Sun-Ken Rock. A compilation manga titled Trigun: Multiple Bullets, featuring a number of short stories (including the previously mentioned three), was released in 2011.

The English dub was one of the flagship shows of Adult Swim (along with Cowboy Bebop) and helped to set the mood that the sub-channel was simply for mature audiences and not necessarily "adult" audiences.

25 years after the release of the TV series, a new anime project entitled Trigun Stampede is set to be released in 2023 and would be produced by Orange.

Legato Bluesummers exemplifies the tonal shift that Trigun faced by having his arrival literally spook the otherwise fun and cheery Vash.

Example of:
Knight of Cerebus

Legato Bluesummers exemplifies the tonal shift that Trigun faced by having his arrival literally spook the otherwise fun and cheery Vash.