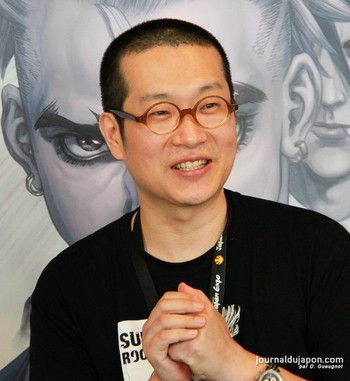 Don't be fooled by his work, he's a really nice guy.
Advertisement:

Intending to be a manga artist from his childhood days, Mujiki Park (Moo-Jik Park, ボイチ, born January 29, 1973 ) aka Boichi majored in physics in college as preparation to draw science fiction works and also to learn the technology of performance and imaging. He went on to graduate school to major in image technology. In 1993, while still enrolled, he debuted in a Korean Shoujo manga magazine. Since then, he is gaining popularity releasing a number of works, and publishing books on how to draw manga targeting a wide range of reader. He also published books focusing on the art of manga as well as the use of computer assisted tools.

He moved to Japan in 2004 and stepped into the world of Japanese manga with Space Chef Caisar published in the monthly Comic Gum. Since then he has published many manga and one-shots.

In 2006, he published 2 scifi oneshots: Hotel (Lucca 2011’s award for Best Oneshot) and Present, both in the magazine Morning. Along with All for the Tuna, Stephanos and Diadem, they’ll be compiled in 2008 in the Hotel tankoubon.

Boichi was also the artist of Raqiya written by Yajima Masao and published by Kodansha from 2008 to 2010 as well as for the Terra Formars Asimov spin-off of 2016 published by Shueisha. Similarly, he was the artist of the oneshots Brutality by Takeda Yuusuke in 2007 and Eques by Kengo Miyatani in 2012.

Boichi is also an accomplished humanitarian. To express his sentiment toward Vietnam and apologize for Korea’s actions during the war, Sun-Ken Rock volume 2’s royalties were donated to the NPO Children of Vietnam. Among other actions, he also initiated actions such as Korean mangakas drawing a support page for Japan’s 2011 March 11th Tōhoku earthquake by giving the royalties to the Red Cross. It’s also with the will to help the reconstruction of Japan following this traumatic event that he began at the end of 2011 up till 2013 the publication of H.E the Hunt for Energy in Shueisha’s Jump X magazine.

He never fails to show his support to the Freedom of Speech and liberty as he did for the events of Paris Terror Attacks or during the Refugee Crisis.Boichi’s manga are firstly published in Japanese but some are also available in a variety of languages such as French, Italian, German, Spanish, Thai, English, Korean and Chinese, showing the always growing interest of the world in his work.

Works of his with their own pages