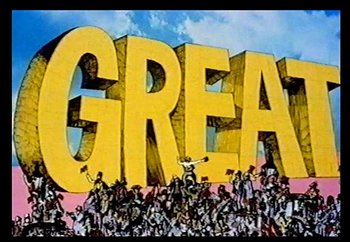 Great is a 28-minute animated film released in 1975, directed by Bob Godfrey.

It tells a humorous version of the life of Isambard Kingdom Brunel (1806-1859), a famous British engineer. Using a lot of puns and silly animation, the film recounts Brunel's eventful career, including the construction of a tunnel under the River Thames, a bridge over the Avon, the Great Western Railway, and large ships such as the SS Great Western.

Great was produced by Grantstern Films and distributed by British Lion. It won the Academy Award for Best Animated Short Film at the 48th Academy Awards in March 1976 (the first British animated short to be so honoured), and also won the BAFTA for Best Animated Film the same year. Keep Circulating the Tapes, as this film has never been released on home video.