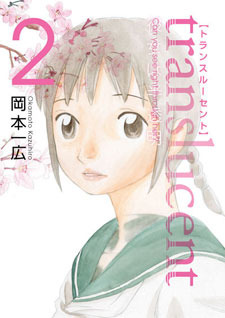 Everyone's suddenly talking about shy high school freshman Shizuka. Unfortunately for Shizuka, it's not what she's wearing, how she's been acting, or what she's been seen doing that's getting everyone's attention — it's very literally what she's not being seen doing.

Shizuka has contracted "Translucent Syndrome", a strange and mysterious medical condition that has only one symptom — it slowly turns the afflicted person translucent — anywhere from just slightly see through to effectively outright invisible. Sufferers from this strange non-contagious disease are otherwise left perfectly normal — they can see perfectly fine, they can touch things without a problem, etc. etc. They are perfectly normal people except you can see through their bodies like a sheet of glass.

Did we mention that Shizuka is a budding stage actress, that going invisible at random kinda screws with that, and that kinda bums her out?

Translucent is a seinen manga by Kazuhiro Okamoto, which was serialized in Comic Flapper from 2005 to 2006. The first three of its five volumes were released in English by Dark Horse Comics, but localizations of the last two volumes were initially delayed, then effectively cancelled and the series has presumably been abandoned by them.