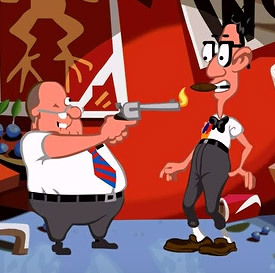 A cigarette lighter designed to look like something else, such as a toy ... or a gun, in which case it may become a Weapon for Intimidation.

There may be some actual toys or guns that look exactly like it, causing a character to mix the two up. In the latter case, this can easily be either Played for Laughs or Played for Drama, depending on the situation.

Compare Couldn't Find a Lighter, where the thing being used to light a cigarette or similar doesn't look like a lighter because it isn't. Also compare "Bang!" Flag Gun.